The alarms are set for 5am but L’s goes off a 4.45. A clock malfunction she claims which I have no reason to doubt as she’s not the sort of person to set an alarm earlier than necessary. Then it’s just the little matter of a two and a half hour drive down to Reading.

The Reading Half Marathon is the second largest half marathon in the UK, after the Great North Run and something close to 15,000 runners have signed up for this year. Parking is good and we have pre-booked a convenient spot. The race village is a bit of a disappointment compared with the greenery of Nottingham’s Embankment where the Robin Hood Half is held. Reading’s is in the football stadium's car park but it’s adequate.

It’s a short walk or jog to the race start where one of the starters is Mr Reading himself, John Madjeski, whose name adorns Reading FC’s stadium in which we will finish later, as well as several other buildings, as I discover when we pass them on route.

I’m fairly close to the front and get a good view of the wheelchair race start which is five minutes before the main event. The wheelchair race included able-bodied former athlete Iwan Thomas who took part for a Channel 4 show about Paralympic athletes. Then I return to my start pen, which has a nice grassy warm up area next to it, which also doubles as a loo stop for many. 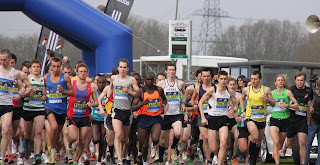 I start more or less with the 1:30 pacer but resolve to not be so stupid and don’t try to keep pace with him, although he runs a sensibly paced 7:40 first mile like me. I’m happy with that as I wanted a steady, non suicidal start. I then increase to around 7:10 miles which I’m comfortable with. He though needs to average around 6:50, so he needs to get his skates on and he soon disappears into the distance.

There are plenty of bands and lots of vocal support as we tour various parts of Reading including the university and the town centre. The old folk’s band stood in their driveway playing some cracking tunes stood out for me.

It’s a nice flat, fairly straight course with a few ins and out around the town centre shops but I’ve had worse. There are a few minor hills, the hardest of which comes at two and a half miles but it was quite short. The 1:35 pacer passed me on that hill, telling his troops they’d lose a bit of time here that they’ll make up later. Not that he seemed to be losing any as he skipped past me.

Another stand out moment was the drinks station at around nine miles which was outside a pub. They were dishing out beer to the runners, unfortunately I was the wrong side of the road at the time and missed it. I almost went back... but thought better of it.

I was thrilled to get a huge crowd reaction at ten miles before wondering if there was something amiss with my kit. Then someone with their entire kit amiss overtook me. I’m not sure a mankini is the best thing to run in but it certainly got the crowd going, well the female contingent anyway, well to be honest the older female contingent. It certainly wasn’t pleasant following his rear for the next half a mile or so. I’ve never seen runners part so quickly to let anyone through.

There were timing mats every 5k, which is nice, splits are always good but the fact they’re in km’s makes it all a bit pointless to me when, in a half marathon, everything else is measured in miles but a minor gripe.

Entering the stadium at the end was a bit overwhelming, even for a tough old boot like me. The organisers had got the crowd arranged just right, so that when you entered the stadium the place looked full and the noise was amazing. It was only afterwards that you could see that two sides were empty and others not quite full.

There was also a nice area past the line where you could watch others cross the line as you got your breath back. Some races quickly usher you back out of the stadium. As I looked back at the finish I was horrified to see a bottle of Lucozade Sport cross the line only a minute or so behind me. I was well ahead of the chap dressed as a testicle though. Credit to him, must have taken some b**** to dress up like that for charity. I hobble off for a post race massage, which isn’t one of the better ones but still very welcome and then I head back to watch L finish.

My time was just over 1:38 which I'm well pleased with. Three minutes quicker than last month, although still nearly two down on last years PB but it's early in the season.

I have to say practically everything was excellent, almost the perfect race. It was very well organised given the large numbers involved. A great event with a great atmosphere. I even liked the medal. It's just a shame it’s not a hundred miles nearer home. All we both want now is a hot bath, just the little matter of the two and half hour drive home before we can get one.

Later we even get an emailed apology about the car parks not opening early enough to let us out but this didn’t pose us a problem but it shows how seriously they take the organisation. The ‘delay’ gave us a chance to watch some of the late finishers, as well as have coffee and cake.

It was a Kenyan 1-2-3 up there at the front in the men’s race but Liz Yelling split the Kenyans in the women’s event and came second. David Weir won the wheelchair race but in third was the Iwan Thomas, I’ll look forward to watching his TV show.

Son turns up at home not long after we get back, two days after we collected his stuff from Warwick. Having been picked up by his father very early on Saturday morning I guess he felt duty bound to participate in the eight mile sponsored walk his father was involved in on Sunday. So he’s done his own ‘marathon’ today as well.

We add to our distance and walk the two and a half miles or so to the Victoria in Beeston. Where we have food, a few beers and then walk back. A very good warm down. A bit excessive but the dogs did need a walk.