I’m on the bike today despite the fact it's a bit miserable out this morning. At least I’m not plugged into Rose Tremain like L. Blimey, Rose Tremain and a bit of drizzle, if she was a character in my Stuart McBride book she’d have slashed her wrists by now. She recommends I delete ‘The Colour’ from my iPod. Will do. Loved the ‘Road Home’ but can’t see me reading another of hers not after the awful ‘Trespass’ and now L’s non-recommendation of ‘The Colour’. 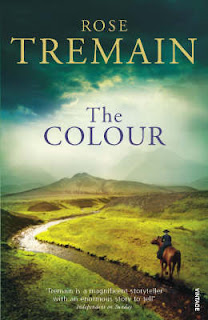 L is seriously going through it at the moment. Reading Ian McEwan on paper and Rose Tremain on audio. Nightmare.

We listen to the cricket at work. England again serve up a classic match and beat the West Indies by the skin of their teeth. It should be enough to send them through to the quarter finals but they still need other results to go their way. All six of their games have been total cliffhangers. So they just have to stay on in the tournament, how could anyone have the nerve to knock them out. They have been the only 'entertainment' in what has otherwise been a very dull and predictable tournament.

While the fixtures in Group A have more or less followed the form book and produced the expected qualifiers with ease, England's Group B is still undecided and will go down to the last few games purely due to the inconsistencies of an England side who are capable of doing the most random things. Such as losing to Ireland and Bangladesh as well as making hard work of the Netherlands but have beaten both South Africa and the West Indies as well as drawing with India. Bring on the Aussies.

At lunchtime, during the change of innings, we hit the pub. A pint and a half and game pie. Thankfully I’ve not got to run on all that, tonight all I’ve got to do is knock a few balls against a wall. That is if my opponent has recovered from the ‘wine’ inflicted injury that caused him to miss last week’s game.

He’s been training hard, even to the extent of cycling, indoors of course, and even monitoring his heart rate... which is getting a bit serious. He says it was simply something to do while cycling. Personally I find dodging the traffic keeps me occupied but then I do leave the garage.

I don’t understand his 'indoor' approach, its loads more fun on the road. Like tonight, I enjoyed chasing down another cyclist. I couldn’t resist when I saw what looked to be a quality piece of cycling engineering (e.g. expensive) up ahead and going quite fast too. I felt quite smug when I caught them. It wasn’t a bike or a person I recognised and as I got closer I saw that it also seemed to have a quality piece of engineering astride it, complete with a tasteful little pony tail out of the back of the helmet. I protect their rear for a while until we stop at the traffic lights, when I pull up alongside. Female too, which is nice, it’s best to check, pony tails can be deceptive. Very grumpy though, so I push on ahead. She can protect her own rear.

Another thrilling squash game. 2-2. Thrilling as in I’m thrilled, he’s isn't. In fact there’s another broken racquet strewn across our court and it's not mine.