It’s an odd weekend for us, to get two lie-ins, because it’s an event free weekend. It’s an odd weekend for the dogs as well, a long park session with the footballs two days in a row. Doggo seems to survive, I was worried he might be stiff after yesterdays session but he seems ok, even after todays. Well he manages to hop up on to our bed for a kip without a problem. He struggles to get off again, once evicted, but I’m sure that’s just for show.

Then I go for a run with a couple of prostitutes and an arsonist. Yep, more audiobook. I run seven miles without too much trouble, which is quite satisfying. I’m attempting to run myself back into some sort of fitness before the Reading Half Marathon next week.

The exhibition contains a multitude of phalluses (or should that be phalli?) which they saw as a good luck charm. A fact that may or may not be useful as a future chat up line. Their prize exhibit though is The Warren Cup, which is not a trophy on offer in some sporting event, but actually a silver drinking cup featuring two homoerotic acts. 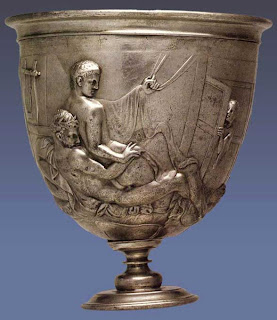 The Romans certainly weren’t shrinking violets that’s for sure, clearly not adverse to a touch of homosexuality amongst their horseplay, and goatplay for that matter. As for the Gods, they were crafty ones. Jupiter turned himself into a swan to seduce Leda. Odd choice but it worked. Not so sure it would these days, well unless you’re Natalie Portman.

Lakeside is just across the road from the Tennis Centre gym, where L heads next, so I tag along and do 15km on the bike. As well as a few more chapters.

Time for a curry and a glass of wine after all that I think.