They’ve changed the door code at work, after who knows how many years. I’ve been here fourteen and it didn’t even change when we moved to new offices. So I’m stuck outside this morning scratching my head punching in random numbers until the correction combination drops into my head.

Today’s supermarket challenge - gnocchi, which is some form of fresh pasta. Taxing but do-able.

The BBC are 'commemorating' ten years after the Foot and Mouth crisis. Firstly they're a bit late, it started in February 2001, but it does bring back memories. 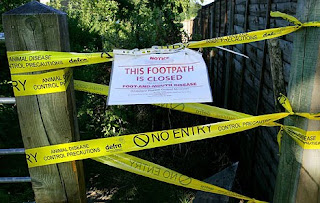 We were serial visitors to Snowdonia and the Lake District back then. Rarely a month went by without a visit to one of the other, so it curtailed us a bit. L also had her participation in the infamous Grizzly run in Devon and the Coniston 14 miler called off. I recall we went up to Scotland in August and detoured on the way back, ending up in Wasdale, Cumbria to do our bit for the Lake District economy. The area still had guard posts on the footpaths and disinfectant buckets everywhere but they were starting to relax restrictions by then. 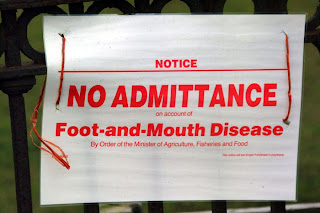 Come October we headed down to Seaton in Devon for the rearranged Grizzly with a ten week old puppy sat on L’s lap in the car. An event that, in itself, would change holidays (and other things) for good. As I recall he was freaked by our choice of music (suppose he’s not been the only one) and we had to turn the radio off. He had a great weekend, lived off chips and sausages and wee'd on his first hotel room floor. Then a month later we took him for his first visit to a reopened Lake District and then again at New Year with the place blanketed in snow and him wrapped in a towel for warmth... ah memories. Now look at the bundle of fur...

That particular ex-pup isn’t training tonight but t’other one is. He’s brilliant. If only he’d been this good yesterday. Afterwards I collect L from her parents’. She warns me that kissing and hugging are banned tonight. Thankfully she only means with her folks.

The boys get roast chicken for tea. We’re allowed a bit too. Apparently they’ve earned it tonight... Well, only one of them trained. I’m not sure the other one did anything... but he was a very cute pup ten years ago.