I had planned to bike today but decide to skip it, as I feel a bit relapsed after last night’s run or it might just have been too much pizza last night.

I’m close to finishing an audiobook in record time, although it was only a six hour one but Stuart McBride’s ‘Cold Granite’ seems to have captured my morbid fascination. 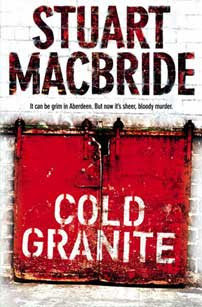 It’s the first in his series of book about Detective Sergeant Logan McRae and was a free download from the Sunday Times. In fact they’ve handed over four of his books for nothing. Set in the glamorous location of Aberdeen, it is an unpleasant little number with bodies, many children, winding up dead everywhere. Despite that it’s quite witty with it. Chuck in a pathologist ex-girlfriend (that's pathologist not pathological) and a half naked WPC in his apartment but he was too drunk to remember how she got there. It’s an interesting read.

Training for both boys tonight even Doggo. He only gets a session once a month, just to keep his paw in and it’s tonight. He looks terrible afterwards.