L accepts my offer to walk the boys this morning, lest she might otherwise strangle 'that' dog, I assume she means MD, and heads off for a swim. I take it he ignored my advice to behave yesterday. Although that might have been the day a tipper truck decided to tip a load of gravel in front of him. He wasn't happy about that but I can see his point. L does get terribly bad luck with him, there always seems to be someone trying to provoke him when she takes him out.

I throw balls for them both on the park, left-handed, as I have a bad right shoulder. Which I think I got from playing an overzealous game of tug with MD. Yep, he gets the blame for everything. It didn’t help that I probably aggravated it at squash last night.

I end up on the black coffee at work, as we’ve run out of milk yet again. Perhaps it's a good thing as we have a wild night out on the M69 planned. No that's not code for something, I do mean the motorway, as we head over to Warwick to collects Son’s belongings but not actually Son. He’s having one more night of partying before a four week ‘sleep it off’ at home.

Once back home, we go for a pint in the Wollaton where it’s band night in aid of Comic Relief. 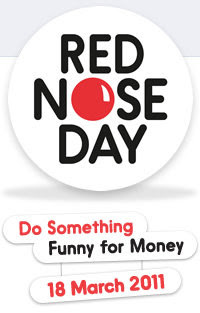 The beer isn’t that exciting which is bad for the taste buds but even worse for the wallet because it means L is on the wine. We move down to the Wheelhouse where there's another band on but where the Abbot Ale keeps us both happy.