Getting The Hang Of Customer Service, Perhaps.

I get up early and walk the dogs, L's having a MD break and perhaps grabbing an extra half an hour in bed after our harrowing day out yesterday. Then I cycle into work. It’s nice and sunny, which makes for a very pleasant ride in.

Perhaps Derby County’s owners are gradually getting the hang of customer service. The deadline for season ticket renewals has been put back until after the end of the season. So now we’ll know what division we’re renewing for, which is handy. That is, if you want to renew for another year of gloom and a football side assembled on the cheap... Which is perhaps where their second initiative comes in. They are now offering a Season Ticket Money Back Guarantee. Right up until the day of the first game of the new season, if you think the club have not done enough business in the transfer market you can get a full refund. Ultimately none of this will make much difference but it's definitely good PR and for once good customer service.

Squash. I again win two games, that's for the fourth match in a row, but unlike on the previous three occasions, I lose more than I win. I lose 4-2. My successful run was good whilst it lasted.

My opponent is elated, despite losing two games, and after trashing his £50 racquet last week he trumpets the quality of its £15 replacement and vows to buy a dozen. If I was him I’d wait to see how it goes next week.... because I can see where this is headed. One day he’s bemoaning wasting £50 on one racquet, the next day he’ll be bemoaning spending £200 on a dozen of another....

The game has aggravated my shoulder. I need a drink to get over it.

Back home I watch the 2nd day of World Track Championships from Holland. There's an encouraging second place for our Women’s Team Sprint duo and an impressive victory for the Women’s Pursuit Team, which includes two débutantes in Laura Trott and Dani King. 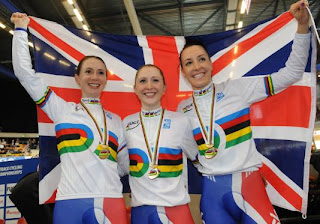