I’m still on dog duty and amazingly Wollaton Park is open this morning and it was only 6:40am. Presumably they forgot to close it last night, either that or the park keeper has a spot of insomnia. The boys were thrilled naturally but it meant I had to throw some sticks, which I wasn’t keen on. Particularly because I had already aggravated my shoulder at squash last night. I tried throwing then using my left hand first, which is my good side but MD just couldn't get the hang of the accurate throwing this produced, he kept losing sticks. Honestly collies’ eyesight is appalling, so I had to switch to my right which didn't do the shoulder much good.

Then I cycle again, which is my third bike ride in a week, it's been a long time since I've done that. I’ve been doing too much running obviously, not that I’ve done any since Sunday. I didn't actually intend having a week off running but that's how it's worked out. It’ll probably do me good. The ride was quite nice again in glorious weather, I think the shorts might have to come out next week.

L’s at the gym, probably working out to Ian McEwan, then again perhaps not, she’d fall off the dreadmill. I keep forgetting she reads ‘paper’ books. How terribly quaint and old fashioned.

She and the boys meet me on the way home. They’re just ambling across the park as I turn on to the estate. If this counts as their evening walk, then that means we can go out tonight without them.

Yep. We head into town and check out the Cross Keys where we haven’t been before. 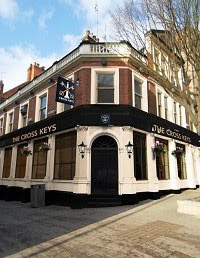 Not bad, six beers but nothing that really grabbed me. Although we'll certainly pop in again. It’s a short hop from there to the Keans Head, which we find is a bit better.