Last Day Of The Tour

A day off work today, we are visiting another university. Leeds Met today. This is the last one of the five, then it’s just the little matter of Daughter making a decision. It’s been exhausting, I think the car would agree, and still no t-shirt for the ‘University Tour 2011’.

Leeds Met have just announced that they intend to charge fees of £8,500, which either shows grand ideas or delusions of grandeur. The jury's out. Personally I would have thought it would be suicidal for a 'small' Uni like Leeds Met to charge high fees because no one would go there at that price. Unless everyone else charges £9,000 in which case Leeds starts to look cheap(er).

As for our visit. The course sounded good, the place looked good, as well as nice and modern. It’s funny how all the universities we've visited have been showing off brand new flashy multimillion pound buildings, like this impressive 'rusty' number in Leeds. 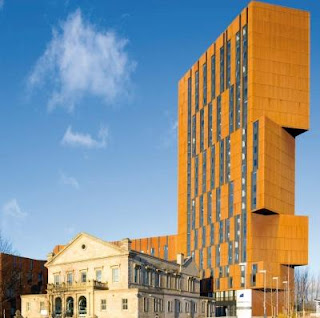 Yet they’re all pleading poverty...

They didn’t give us a campus tour which was odd but they did give us an accommodation tour, although the place was a dump. They showed us one of those private Opal buildings rather than one of their own, which was an odd choice. Perhaps money changed hands, Opal will have plenty of it considering the prices they charge for a small hutch. Also no lunch and no coffee from Leeds, for which I mark them down but I don’t suppose in the great scheme of university selection it’s relevant. Overall I liked the place, it would be in my final shake up. Now we await the verdict of the grand jury.

We get home early enough for the dogs to get a sess on the park. Then I go to squash. It’s a heated game. I hope this is because I keep nicking games off him. Only nicked one tonight, although one defeat went to an epic 32 points, 17-15, should have won that one.