The last of my three indoor winter dog shows is today and it’s just as cold as it’s been at the previous two, only this time without the snow on the ground.

At least we put in a decent showing. There are two fifth places for Doggo, one of which he gets a rosette for. Then a ‘nearly’ clear with MD, we missed a contact on the second last obstacle because I was rushing him but there’s no point being slow and only tenth... It was a good run though. Then we do go clear on a too fast course for a rosette for 12th, then a second scrappy clear where we’re unplaced, then a bit of a disaster. So a bit of everything today from MD.

In the evening, we head down to Broadway for the usual meal and film deal. L hasn’t finished the book of target film 'Cloud Atlas’ yet, so it’s time to bring on a substitute. I pick something that I hope will be dark and depressing.

‘Lore’ is based on one of three stories in Rachel Seiffert's novel ‘The Dark Room’. It is set in Germany at the very end of World War II.

The father of fifteen-year-old Hannelore or Lore (Saskia Rosendahl), an SS officer, is abandoning the family home. Destroying evidence and shooting the family dog as he goes, before heading off to the front, where he’ll probably meet his death.

Then Lore's mother prepares to leave too. After hearing a radio announcement confirming Adolf Hitler’s death, she surrenders to the Americans. Now her children are left to fend for themselves and Lore, as the eldest, is in charge. Her mother tells her to find a way to their grandmother's in Hamburg, a mere 500km away.

Finding out that the trains are not running, they start their journey across Germany on foot. This is a new Germany, a defeated Germany that lies in ruins, people are starving and sick. They find that some people are willing to help them whilst others most definitely are not and in fact are a danger to them.

This is journey that is viewed mainly through Lore’s eyes and from her perspective. A journey which is as mental as it is physical, as she attempts to comprehend how her country, the supposedly superior one, is now occupied and divided into Russian, American, British and French zones. 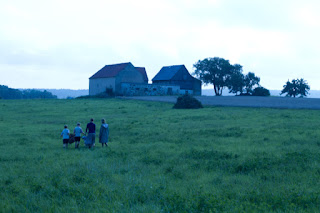 Across the failed Third Reich many people mourn their dead leader and condemn the lies the Allies are spreading about him. The Americans post up photographs from the liberation of the concentration camps which many Germans decide are mere propaganda but Lore knows otherwise. We see her tearing away a piece of one of the photos, one that contains the image of her father .

With that Lore realises just how much her father, and probably her mother, were involved in the atrocities. Then she meets Thomas (Kia-Peter Malina), a Jew who was supposedly liberated from one of these camps.

Although Thomas may not be all he appears. It is revealed that the identification papers he carries are not his own. He tells one of the other children that he is not Jewish, but carries the papers because the Americans like Jews. Again though Lore knows otherwise, that is if she realises what the numbers tattooed on Thomas’s wrist mean. They may not be his papers but clearly Thomas has survived the camps and perhaps suspected that the other children would not accept his help if they thought he was Jewish.

An uneasy relationship builds between Thomas and Lore, there is some attraction but mainly it’s out of a necessity to survive as Thomas helps them cross out of the American zone. 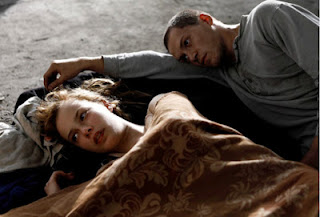 When they finally reach Hamburg, Lore finds it hard to settle in at her grandmothers. She has much on her mind. Forced to abruptly grow up, to question her engrained beliefs and to rethink her entire ‘National Socialist’ outlook on life. Then there’s the guilt she feels for how they betrayed Thomas.

‘Lore’ is not an easy film to follow but it’s a good one, although it could have perhaps done with a spot of narration. It’s a film that grows after you’ve left the cinema and it shows a part of history that is rarely shown. Well worth a look.

Dark and depressing... Bingo. Now for a debrief in Brewdog.