It’s too packed in the Brunswick for lunch, we’re told there’s a 45 minute wait for food at least. This is because it’s the Derby Winter Beer festival, although I’ve never really understood why everyone hits the pub first. We decamp to the Waterfall which is completely empty, as usual, but the food is ok and swift.

Later, after an hour or more entertaining the boys, I head into town to meet L. We go for a drink first, in the Hand and Heart, before heading off to the Rescue Rooms.

We arrive to find ‘Three Blind Wolves’ on stage, looking a bit hemmed in. Being the first of three bands, they don’t seem to have been left much space. They sound distinctly American and for a second I think they have Craig Finn of the Hold Steady playing with them but nope, that’s definitely a Scottish accent. They’re another band off the prolific Glasgow production line, albeit playing some, sort of messy, countrified rock complete with what appears to be the odd barbershop harmony. They’re a lively bunch though, with a very animated front man and some interesting tunes. 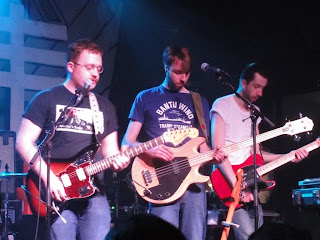 They’re also overrunning... as by consequence are Canada’s Wintersleep, all the way from Nova Scotia. Wintersleep have been around forever, or at least they appear to have been. I saw them back in 2009 playing with the Editors but I don't recall them leaving much of an impression.


They have an air about them that says ‘we’re been around forever and we know what we’re doing’ so their set is certainly competent, full of catchy boppy tunes. Perhaps their only crime is that they think they're headlining or at least wished they were, hence the later than expected start time. Not really their fault I guess. Anyhow I was really enjoying their short but sweet set until they ruined it with a rather self indulgent last track finale. 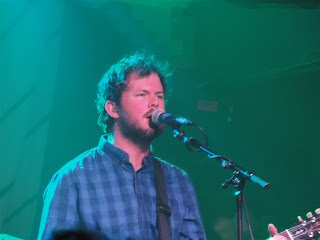 When Frightened Rabbit take the stage, or is it an alter, it’s a very religiously inspired stage, it is to a big appreciative cheer. The F-Rabbit faithful are ready to worship at that alter/stage and appropriately the band open with the boisterous ‘Holy’. Now the Rabbits do religion, sort of.

Then with no messing, it’s into the classic ‘The Modern Leper’, followed by something to ‘dance’ to in ‘Old Old Fashioned’. Not one of my favourites, but it’s popular. 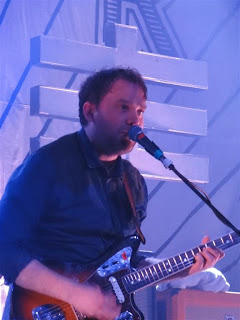 Then we’re back to the new album ‘Pedestrian Verse’ and ‘Late March, Death March’, which we’re told is about arguments during the walk home from the pub. So at least it’s not all religion then and it’s good to know we’re still having girl problems.

As you would expect, a lot of the set is taken from their rather excellent fourth album. Which is a slightly more upbeat selection of downbeat misery but then I suppose 2010’s ‘The Winter of Mixed Drinks’ was too. Only this time, the main man, Scott Hutchison is back to his poetic best and excels himself with the lyrical depth that he puts into the songs. It’s an album that has finally taken them into the top 10 and the recognition they’ve deserved for years. Those rabbits have finally emerged from the warren blinking into the sunlight, although I did have quite a soft spot for that warren. 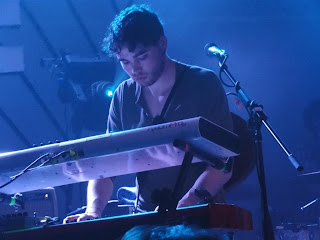 The new material ‘December's Traditions’, ‘Backyard Skulls’, ‘Dead Now’ etc, sit well alongside the older material and the band are on fine form throughout, at times impressively using four guitars plus a bass guitar to fashion out their sound.

Hutchinson straight bats the many requests, saying we work to a setlist you know and letting the crowd play what he calls ‘setlist bingo’ e.g. keep shouting until you reach the song he was going to play anyway.

They didn't used to of course, have a setlist I mean. Back in the day, they used to make the setlist up as they went along. It was part of their charm. My favourite FR gig is still the first time I saw them at Leicester’s Musician, unplugged, and the setlist finished after about 6 songs, then they took requests. 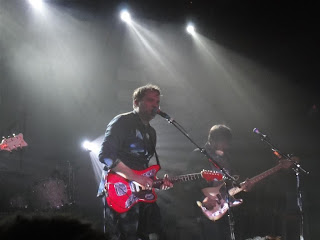 They’re more polished these days, which is a little sad, as it was the rough edges and the cosy, shambolic feel that I used to like about them but there’s still the Hutchison humour, they still do the amazing ‘My Backwards Walk’ as well as now having some equally amazing new songs such as ‘State Hospital’, their single from last year.

We do get an acoustic moment. Standing alone on the stage, Hutchison plays a splendid ‘Poke’. Then Andy Monaghan rejoins for an impressive ‘Good Arms vs. Bad Arms’ and then two thirds through the rest of the band return to finish it off. 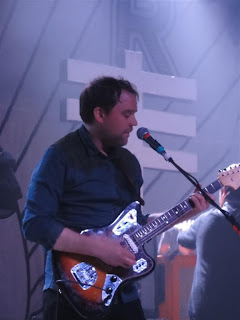 If anything there’s too much tonight from 'The Midnight Organ Fight’, sadly nothing is played from their debut ‘Sing the Greys’ and I would have said not much from their third either until two more surface in the encore, taking the compliment to a respectable four as ‘Living in Colour’ and ‘The Loneliness and the Scream’ bring to a close tonight’s service in the church of the Frightened Rabbit.

They were good, excellent in fact, but I’d still hark back to saying those disorganised, make it up as you go along nights were the best.