This morning we head up to somewhere near Barnsley for a five mile race. Afterwards we’ll be able to head into Sheffield to see Daughter for lunch. We were going to visit her next week and do the Warp Up & Run 10k on Graves Park in Sheffield but as that is £16 for a chocolate bar and a medal, whereas this is £8 for a t-shirt, it was no contest really.

The race, at Wombwell, isn’t actually anywhere near Barnsley but Wombwell itself is a fairly big place. It isn’t though, and I hope it doesn’t mind me saying this, very scenic. Although if you look beyond the town/village itself, there is some pretty pleasant countryside.

Parking was at the recreation ground next to a go-kart track. We looked around for ages for the start line but couldn’t find it before joining everyone else who was warming up on the rack track. Then we saw it, a little start sign at the edge of the track. So... how many loops of the track are we in for?

Just the one and a bit as it turns out, to start with, before we head out onto the road, all nicely strung out. After that, route wise, there is one moderately steep hill called Snape Hill but it’s quite a short one, then the course is pretty flat. A lot of it is around housing estates until its back onto the track for another lap to the finish.

I’m on the results as recording a 32 minute run. I wish. Dear organisers that was not me. I have run a 32 once, maybe twice, but that was a while ago. I ran a 38 today and was quite pleased with that, considering the state of my legs. Although I’m not even sure that time was accurate, I couldn’t see a 4 mile marker and my time for the last two miles was rather impressive. Indicating perhaps that they were short? or that perhaps the earlier markers were wrong.

Then it’s to Sheffield and lunch with Daughter at the Lescar, which is now a bit of a favourite of mine.

Later L lets me entertain myself with my Valentine’s Day treat, Jennifer Lawrence. 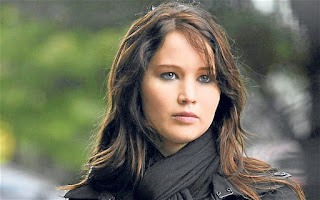 The Hunger Games was actually a bit of a disappointment. I didn’t get to see this at the cinema because L and Daughter went without me but I wanted to see it, as it sounded like a similar idea to Stephen King's The Running Man. Which was a great book but an awful film. The concept of the Hunger Games was similar but the film was very different, it was probably more like the Truman Show or even Rollerball with its reality TV angle.

Actually the Hunger Games was potentially more evil than the Running Man with its premise of children killing each other to survive for the pleasure of a TV audience in an X Factor meets Big Brother style competition. The problem is it's called the Hunger Games but where’s the hunger? The principle of the book, as I understand it (because I haven't read it), is that kids from the poverty struck 'districts' where they have no food are being forced by an evil regime to fight each for food. The very pleasant on the eye Ms Lawrence doesn't look particularly starved and it's all a bit too nice, like they didn’t want to upset anyone. I would hope that the books are a bit more evil and depressing. 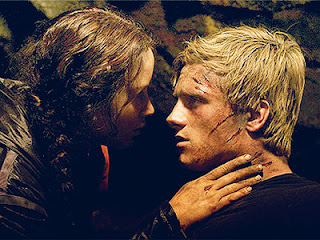 In the end, of course, love or implied love conquers all and Katniss (our Jennifer) survives and wins the games by... well,  not doing very much at all actually. Hiding most of the time which is what I do when I play Laser Quest or Paintball. It’s not very endearing but quite effective.