Derby County are their usual up and down selves. Appalling last week, when they lose 3-0 to Blackburn, then pretty good this week, when they win 3-0 over Huddersfield. Although it has to be said, the opposition were very poor.

Then later, we take the plunge, off the high board... Les Mis, and as we’re going to our local cinema, the Savoy, it’s going to have to be done without alcohol. Gulp. To be fair, tonight would have probably been AF anyway, what with a race tomorrow but being asked to see Les Mis AF is a particularly cruel challenge, which will make running tomorrow’s race with a two dodgy legs seem a picnic.

I also go into this blind, although not blindfolded (there’s a thought). I have no idea about the story, as I haven’t seen either the musical, any of the previous film versions or read Victor Hugo's book. Naturally I knew there was going to be a lot of singing in it or rather, as is often the case, elongated talking. Something I’ve experienced before, the awful Sweeney Todd springs to mind, but that is often better than sitting through a singing frenzy, like say Evita. OMG I’ve done so many musicals, I sound like an expert.

Set in post first Revolution France, the film tells the story of prisoner 24601 Jean Valjean (Hugh Jackman) who stole a piece of bread and got sent to do hard labour for 19 years. Well, it turned into 19 years after several escape attempts. He is then released on parole which he breaks. He then steals from the only man who wants to help him, a priest. He gets caught but the priest forgives him, tells him to keep his ill gotten gains, as long as he makes something of his life. We fast-forward in time and I reach for Wikipedia, I’m confused already because Hugh Jackman doesn’t look like Hugh Jackman.

That ‘making something of his life’ translates to taking in Anne Hathaway, which is way beyond the call of duty even for an ex-convict. Give that man a royal pardon please but no, he is set to be constantly hounded for the rest of his life by a rather jobsworth of a police inspector called Javert (Russell Crowe). 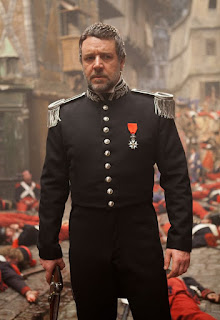 Hathaway’s character Fantine gets sacked from her job for reasons I didn't fully understand, then sells not only the desirable bits of her body but also her hair and teeth to feed her child. The really odd thing is that someone wanted to buy these. Becoming a prostitute for money I can understand, that's a service that sells, but hair and teeth? Hmmm. Is this just an excuse to get a teeth pulling scene in, which is a good analogy... Meanwhile I’m still trying to work out why the supposedly reformed Valjean was hanging around the red light district in the first place. 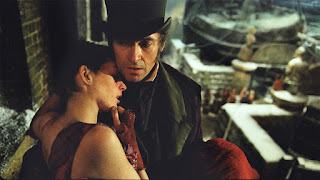 Thankfully within minutes of being on screen Hathaway has died, again not quite sure of what, without us even finding out anything of note about her. With her dying on his watch, Valjean’s task to make something of his life is already looking a bit ropey. This is why I guess he decided to take care of Fantine’s daughter Cosette.

Then we’re into the lesser known second French Revolution. Which I’m sure there must have been more to than some students piling a load of furniture up in a side street whilst they were between lecturers. Amongst them, and clearly lost in France, is a little street urchin kid with a worryingly broad Cockney accent.

Mid-Revolution the rather feeble Marius (Eddie Redmayne) sees Cosette (Amanda Seyfried) and instantly falls in love. They don’t actually speak, words are not necessary. Unbelievably Marius hasn’t noticed the far more gorgeous female beside him, her friend and his, Éponine (Samantha Barks). Who would opt for the incredibly plain Cosette over her, not me. It can’t be because of her personality because; well they still haven’t spoken to each other. No wonder Éponine is so upset. Forget him love, he’s into precious, boring, rich girls who wouldn’t be seen dead on the frontline, you’re too good for him girl. 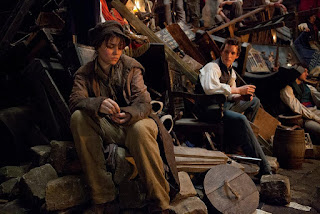 Valjean is initially worried Marius is going to take his adopted Daughter away from him, for about twenty seconds that is, then clearly he realises how expensive Daughters are and changes his mind. Suddenly he is so intent on getting her married off that he carries the now wounded Marius through the sewers to safety.

Only to come up against the mad singing policeman again. Finally, having been shown mercy himself several times, Javert has a moment of enlightenment and lets them go. Then promptly throws himself off a bridge, still singing. You couldn’t make it up. Well clearly someone did, didn’t they Mr Hugo but I guess if you’d précised your own book, which clocks in at 57 hour 51 minutes on audiobook (I checked), you’d have perhaps done it a bit differently. 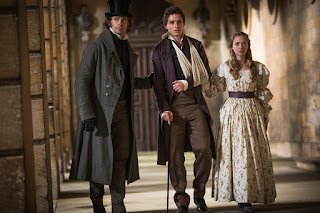 Moments later, Valjean dies too, not that we even knew he was ill and that’s the problem really. We don’t know much at all. Les Mis isn’t into character development and therefore we know jack all about everyone.

It’s a shame because I got the impression there was a really good story in there somewhere fighting to get out but there was so much plot missing that it simply didn’t make any sense. Clearly they expected people to know the story and/or had seen the musical. It's has, however, made me want to see one of the film versions (with no singing obviously) to find out more.

Still, it wasn’t as bad as I expected and although lightweight, it was broadly entertaining. Cast wise, my expectations of Russell Crowe were that low, I actually thought he did alright. Hugh Jackman was ok too, while Anne Hathaway was, as you’d expect, distinctly average. Helena Bonham-Carter was as brilliantly maniacal as ever and along with Sacha Baron Cohen brightened up the whole affair with their comical supporting roles. Ah Corgette, how we laughed. 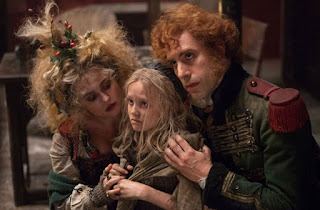 Both have musical previous of course, in the aforementioned Sweeney Todd and are much better in this. Meanwhile Eddie Redmayne looked simply lost, Amanda Seyfried was, shall we say, very hard on the ears and Samantha Barks, well, I’ll have nothing said against her.Cue gratuitous photo. 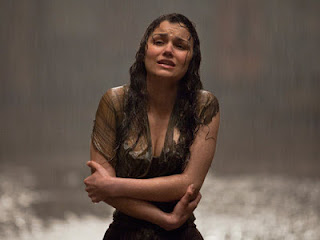 Singing wise, the men sang low which worked, the women sang high, which generally didn't. The street urchin child showed them all how to do it, albeit in Cockney. There were also a few actors who had done the stage show, good on you Sammy, and you could tell.

Clearly Les Misérables is a film you’ll either love or hate. If you aren't a fan of musicals, skip it. It’s a total mystery to me as to why the score has been such a hit. If you are a fan of a decent plot, err, I would definitely skip it too.

Overall I feel rather proud that I got through it and if they were selling ‘I survived Les Misérables’ t-shirts outside, I would have bought one.