A Bit Of A Westerly

It’s almost a two hour drive up to Richmond but it’ll be worth it for some decent scenery to cycle through and there’s plenty of that up there and hills too... L joins me, although she’ll be shopping in Richmond, as best she can while attached to two hounds. Yes the boys are here too.

I leave the start line at Richmond School with three others just ahead of me and a large group getting ready to start behind, who I hope will catch me up and give me some company, if I don’t gel with the three I’ve tagged onto. I don’t, they are way too slow and I’m not quick, so I leave them behind. Then that large group comes flying past me and keep flying. I don’t have a hope of catching them up. Oh well, on my tod, for now at least.

Apart from the short sharp hill just after the start, to warm you up nicely, the first ten miles are very pleasant and picturesque. Chocolate box villages, country lanes, rolling hills etc etc. L would love this.

Then the first big climb of the day arrives at around 15 miles. They call it 'The Stang' and it’s number 57 in the little black book (‘100 Greatest Cycling Climbs’) rising 241 metres in 3.8k. Ouch. L wouldn’t love this. Nor would she love the strong wind and the occasional rain shower, which don’t help one bit. I no longer feel the need to find a group to cycle with. Suddenly it’s every man for himself.

I do love it, kind of. I love the nice alpine hairpins towards the top, very Tour de France. I’m just not so keen on the gradient, I promise myself if that ridge up above isn’t the top then I’m stopping for a breather. Thankfully it is and I plateau over the top to see the boundary signs of the Yorkshire Dales and County Durham. It’s also bloody windy on top. At least it’s downhill for a bit now or at least that’s the theory because the wind kept trying to blow me back up the hill. 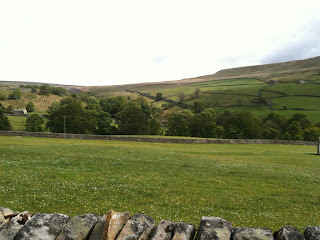 Finally I make it down the other side of the Stang and back in the valley I take a seat on a roadside bench, have a drink, a gel and attempt to text L. No reception. 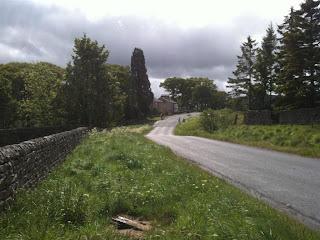 Time to push on. ‘Tan Hill 8 miles’ the sign says. Presumably uphill all the way. Tan Hill, number 51 rising 206m metres in 9.9k. Not so serious but long. It would probably be a really nice climb, if it wasn’t for the howling gale, in my face. Apparently there’s always a westerly breeze around these parts but this was something else. 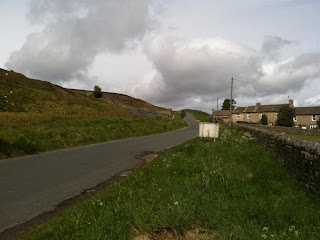 The climb up Tan Hill goes on and on, eight miles worth I guess, with each pedal rev feeling as if it’s taking place in thick toffee rather than on tarmac, due to the aforementioned wind. At times it was all you could do to keep moving forward. Again I find myself promising that if that ridge up above isn’t the top then I’m stopping for a breather. This time, as I pop over the top, I see the lonely exposed building that is the Tan Hill Inn. An oasis. The highest oasis in England. There are numerous knackered cyclists sitting on the benches outside, all looking rather shell shocked and showing no signs of any rush to carry on. I park up and head inside, where I order an Old Peculiar. You have to don’t you. Although only a half. I have reception on my phone so I text to tell L I'm still alive.

Then it’s time for another wind resisted descent. I leave the pub and my fellow cyclists, some of whom are probably still there now. The descent of Tan Hill is interesting to say the least, with many riders being blown sideways across the road and many of the few cars that are up there passing by far too quickly to be safe. Again there are a few alpine hairpins but thankfully on the way down this time. Eventually I arrive at the refuge, sorry I mean checkpoint, on the edge of the village of Keld (30 miles in) for some pastries and cakes. Where I got the impression that it was not just I who was running a tad behind schedule.

The route back to Richmond is undulating but seems mainly downhill or is it just wind assisted. I certainly don’t notice any wind against me. As I said, bliss. I ride with three others for a while but then they unaccountably stop, so I leave them and go it alone again.

The finish is on the outskirts of Richmond, as the town is very busy with traffic by now, mostly shoppers. Problem is this isn’t good for spectators, e.g. L and the boys, and also they don’t bother putting up any direction signs back to the start. So almost everyone gets lost. That was after a very well signed route as well.

For my unimpressive time of 4 hours 22 minutes I get a ‘merit’, for that read ‘ungraded’. I had to get under 4 hours to make a bronze and that wasn’t going to happen in that wind. I think I would have done it under normal circumstances, although perhaps without the pub stop.

L drives home, resting my aching legs which I’m tempted to soak in a few glasses of vino but in the end I drink it instead. Not many though, I stay dry-ish in sympathy with L, who is prepping for her run tomorrow.