Number two bike is misbehaving, so that’s one reason for getting number one out. The other reason is I’m tempted with a Sportive up at Richmond next weekend. So perhaps a bit of practice is in order, not that Nottingham to Derby and back is any preparation for an assault on Tan Hill but it’ll have to do.

I’ve also not entered yet. L questions whether I’m trying to talk myself into it... or out of it? Both. I’ve always wanted to pedal up Tan Hill, I think, for a few reasons. Firstly there’s the Tan Hill Inn, generally recognised as the highest watering hole in England (528m above sea level), and the on-off home of British Sea Power’s own Music Festival. It was also a place I visited with L back in the early days of ‘96. Whether I stuff up my time for the Sportive and the chance of a gold, silver or bronze medal by stopping for a swift one I’m not sure.

Then there’s the question of my little black book. 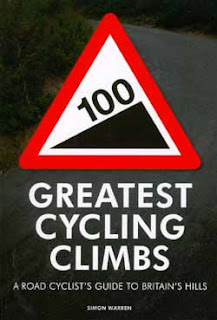 L got me it for Christmas - ‘100 Greatest Cycling Climbs: A Road Cyclist's Guide to Britain's Hills’. There at number 51 is Tan Hill. It’s about time I started chalking a few off the list. Well two actually, number 57 is The Stang and that appears to be far more fearsome, albeit shorter than Tan Hill, but inconveniently pitched between the start and Tan Hill itself e.g. on the route. It’s going to be fun... or purgatory, according to L. I’m also a natural born psycho, according to L. Flatterer. Actually, I think she's persuaded me and it is only the short 50 mile route. They say the 80 and 100 mile routes have harder climbs, number 45 - Park Rash and number 50 - Fleet Moss to be precise but we don’t talk about what I’ve bottled out of.

Anyhow the bike in on number one was much more pleasurable than on number two, although it was a shame the wind was against me all the way but it's all good practice for those winds they have up there in the Yorkshire hills.

So I’m feeling fit-ish for Sunday's run now. L isn’t. She complains MD was a bit lively this morning and is now complaining of shredded knees. Oh dear. Not what she needs before our 10 miler. She says she’ll have to spend most of tomorrow in bed to recover. Good old MD, that's another biscuit I owe him.

We don’t even have an event tomorrow, nothing to get up, for which means we can head into town tonight and stay out as late as we like. It doesn’t matter a jot if we’re still sat in the Ropewalk at close to 1am.

So we do and we are.