Competition For The Kenyans

Happy Birthday to L today and as a special birthday treat, she gets to do the Leeds Half Marathon. This is her first race in a year of running up her 50th birthday. 500 miles in 50 plus races in her 50th year and hopefully 50 t-shirts as well. Hmmm, we’ll need to get a bigger bedroom or get Daughter to move out. Oh yes, forgot, that’s already the plan.

The last time L ran in Leeds they made her go around twice, that was in the full marathon in 2001. It’s ten years on but L doesn’t appear to be feeling nostalgic enough to repeat that feat today.

That race no longer exists, it was axed after the 2003 event due to dwindling numbers. Not many people seemed to fancy the two lap format. The half marathon too was also almost lost despite regularly pulling over 4,000 runners, in 2008 the council tried to drop it to focus on running a 10k instead but people power saw to it that that didn’t happen.

I'm in 10k training for Manchester next weekend; well I’m supposed to be, hence the Trailblazer yesterday, so I’m not running and looking forward to spectating instead.

It’s a good one to spectate at. A marching band leads the runners down to the start; you don’t see a lot of that when you’re running. MD isn't impressed by the band though and tells them so. Doggo isn't impressed that he isn't running but just stands there looking agitated. 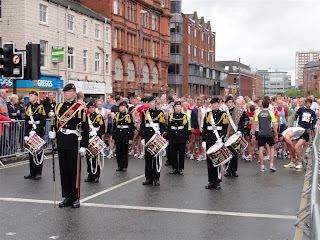 Everybody claps the giant Clanger, who is running for Cancer Research and obviously going for a good time, as he takes his place on the front row next to the Kenyans and the other psychos. 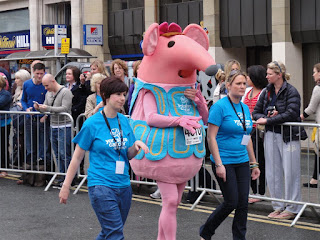 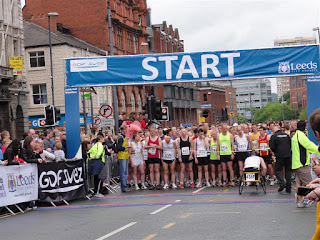 The race starts and L is in there somewhere amongst the 4000 runners but we can't see where. Which is lucky in a way, because I feel Doggo would have joined her.

One person we don’t miss is the chap in the Mankini, not really missable (unfortunately) but unlike the chap who passed me at Reading, he’s combined it with a pair of Y-Fronts, so it’s a bit less obscene.

With the main race gone we await the start of the fun run but it starts in a different place and emerges at the other side of the square. A bit crap. The only downside in an otherwise well organised race.

L does well, a good time but not so good so that she can’t chip chunks off it throughout the season. At least that’s what I keep telling her.

She had suggested ‘Facebooking’ all the races on her challenge. So rather than give her chance to change her mind, I upload the first set of photos for her. I’m kind like that.

Later we escape down the local for some food and a few birthday beers.