My other club, Ebbsfleet United, who I have a membership with via www.myfootballclub.co.uk have got themselves promoted back to the Blue Square Premier at the first attempt after being relegated last season. 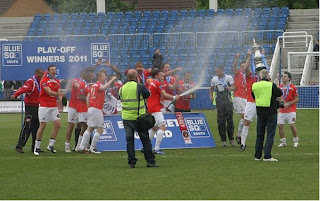 They bounced straight back via the Blue Square South Play Offs beating Farnborough in the final on Farnborough’s own turf. Hopefully this will also boast their membership figures. Anyone can sign up for a free 30 day trial via www.myfctrial.com.

Now they’re back in a national division I might even get to see them play again. It can’t be any worse than watching Derby. Next season there’s also the re-launched Ilkeston Town to support. So who needs league football? Ah, obviously me. I’m one of the 16,200 blind faith-ers at Derby who have already renewed for next year. Amazingly that’s only 500 down on the renewal level last year. There really mustn't be anything to do in Derby on a Saturday, as well as Sunday to Friday obviously.

It could also be to do with the 'your money back if you’re not happy with the pre-season signings' offer. Of which there are none yet, apart from capturing the signatures of the loan players who propelled us to the dizzy heights of 19th place this season. No doubt some season ticket holders will already be sharpening their pens and getting ready to fill in their refund request forms before the rush. What would be really funny is if 16,100 asked for their money back come August, unfortunately it won’t happen.

My other other team e.g. Fantasy Football, lose in the newly invented Play Offs, at the semi-final stage, by one solitary point. Why do I always lose every year by one point?

As its British Sandwich Week (15th - 21st May) it’s appropriate that Sainsbury’s have run out by the time I get there at 1pm.

No dog training tonight. We hit the park instead.