Lunch In A Dog Bowl?

We trek over the Coventry this morning for the May Day 5 mile race, organised by Godiva Harriers, held just a mile or so down the road from Son’s university abode.

It’s not my favourite sort of race at all. Multiple laps of a park, two and a half laps in this case. Thankfully Memorial Park is a very pleasant location which eases the pain, unfortunately the extreme headwind on the back stretch of the course heaps it back on.

The boys are with us but have to stay in the car. MD doesn’t get to participate today. Then we head over to meet Son for lunch, who probably has to get up early especially. We eat at one of the Varsity chain bars, where they’ll serve your meal in a dog bowl if you wish. I kid you not.

We have one in Nottingham, a Varsity that is, and it was our bar of choice when I was a student, although it had a name back then. In fact I don’t think we knew what a ‘Varsity’ was, but then we weren’t at University either we were at ‘Polytechnic’.

As it happens the food at Varsity was good, we go for the plated option not the dog bowl, and they even served proper beer, so no complaints.

Later we take in a film. ‘Never Let Me Go’, not the vampire one. It is based on a book by Kazuo Ishiguro, which I haven’t read. It’s a dark, depressing tale, which opens with a man in hospital on an operating table but soon we get flashbacks to the happier surroundings of a typically English boarding school. The period is the late 1970’s/early 1980’s and it is here at Hailsham that Ruth, Tommy, and Kathy H grow up together. They fall in and out with each other and do all the other things kids do.

Tommy is a bit of a misfit but Kathy is always keen to help him out and he becomes the not so secret love of her life. Their affection is mutual but ultimately he's stolen from her by the jealous and much more confident Ruth.

Boarding school is often a sheltered existence but this school is more sheltered than most, there are no parents in the background, no brothers and sisters at home. The children don’t question it, in fact they don’t question much and when a new teacher (Sally Hawkins) reveals the reason for their existence, and is fired the next day for doing so, they pass it off with a shrug. They had suspected something like that all along. They are human clones, born to exist solely to have their organs harvested once they reach adulthood.

This is an alternative Britain, where life expectancy has risen to over one hundred years because science has eliminated disease by taking organs from clones like them. The dating of this in the past rather than the future is interesting, does the author suspect this goes on now... and the period adds to the ‘1984’ touch the film already has.

When the three of them are old enough to leave ‘school’ they are moved into a farmhouse where clones from other institutions in the ‘National Donor Programme’ reside. The other institutions were more ruthless places. Hailsham was an experiment in treating the donors humanly; elsewhere the clones were treated more like livestock. Now though, for all of them, the clock is ticking. The farmhouses are simply waiting rooms until the day of their donations arrive. Meanwhile Tommy and Ruth are very much an item and consequently the relationship between the two girls gets more strained by the day.

Keira Knightley plays Ruth and I've always had a bit of a problem with Keira’s acting. She’s much the same in this. When the two leading ladies are required to do ‘sad’ Keira does it by quivering her bottom lip as if it's on a puppeteer’s string whereas Carey Mulligan, who plays Kathy, does it with every part of her face. Different class. Although the rivers of tears were perhaps a bit overdone by the special effects department.

Roll on a few years to 1996. Kathy is now a carer, the only recognised way to dodge the knife for a year or two. Carers help the others through the donation process until eventually they too have to face their own demise. She comes across Ruth, who she hasn’t seen for years, in one of the hospitals. Ruth has already made two donations. No one usually survives a third and they’ll be no Holby City style cardiac team rushing around trying to save a donor. They are simply said to have ‘completed’ and it’s Goodnight Vienna.

Ruth leads Kathy to Tommy (Andrew Garfield), who has also made multiple donations. At which point Ruth apologizes to them both for stealing Tommy. Just a touch bloody late love. 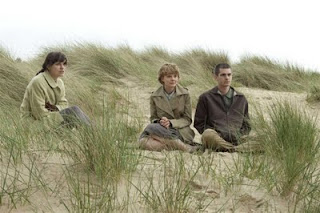 Although... had Tommy already donated his brain at that point, so that he was unable to choose between the two girls for himself? Ruth clearly thoughtlessly forced him to have night after night of raucous sex with her, against his will, and in Kathy’s face, when they all lived in the farmhouse together.

This does though tally with the theme of passive acceptance that runs throughout. There is no fight in any of them. Their situation is seemingly just one more thing to add to the long list of things a teenager can get pissed off about but CBA to find a solution to. 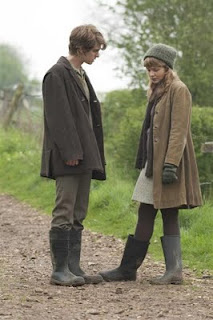 I guess, the point is supposed to be that they have been bred and raised to accept their fate, just like farm animals and farm animals don’t tend to plot revolution. People though are not farm animals and although she claims to regret it now, Ruth did at least have the balls to embark on a passionate affair during her short life. While the other two generally just wandered around looking lost. Kathy would probably never have gotten around to jumping Tommy even if they’d been given another 50 years to live. She only pairs up with him now, in 1996, because Ruth throws them together and equally it’s Ruth who persuades them to seek out their former guardians to find out if the rumour that people who are in love can be given a deferral, a few more years of life, is true. It isn’t. This though shows that there's perhaps a little fight in them somewhere.

Yet nobody, not even Ruth, rebelled in the face of the establishment. No one ever tried to run away. Would anyone have tried to stop them if they had? Who knows? They had wrist bands to clock in and out of the farmhouse but other than that... nothing, no watchtowers, no razor wire. What's the worst thing that could have happened to them? Death? ‘Never Let Me Go’ isn't a story that is big on answers.

Instead their fate is chillingly accepted and the utter passivity of the three of them is heartbreaking but also quite annoying. 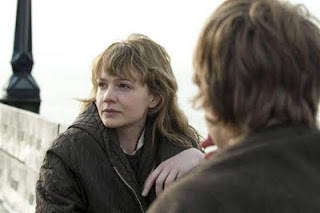 So, no, the story does not have a happy ending. There is to be no final twist. In the concluding scene Kathy stares out across the fields, both her friends are now gone, her carer duties are completed and her first donation is scheduled. Although she can at least reflect on the fact that she did finally get to slip into bed with what was left of Tommy and thankfully found something that had yet to be donated.

In her life, as I guess in ours, there are no deferrals, no second chances. In the end we are all powerlessness to prevent death. It comes to everyone and always too soon, perhaps leaving us all thinking that we've not had enough time to do what we wanted to do.

This was a difficult film to make I would imagine and ‘Never Let Me Go’ is very good, to a point. It is dark, tragic and thought provoking, yet it's exasperating because it’s difficult to get attached to any of the characters or their unfulfilled love affairs and therefore the overall impact is perhaps not as great as it could have been. Still, I do love an unhappy ending.