I’m on TV this morning, me, Haile Gebrselassie, Paula Radcliffe and 38,000 others. Well not Paula actually, she got wind of the fact I'd entered and pulled out, citing breathing difficulties while training. Hmmm. When I get ‘breathing difficulties’ I usually blame it on too much Snecklifter. Us athletes are all the same you know.

It’s The Great Manchester Run, self styled as Britain’s Premier 10k, although that's a bit of a cheat because there are actually five races happening here = five waves. Everybody doesn’t run as one like at the London Marathon or the Great North Run. The run was first staged in 2003 with a field of 10,000, this year they have sold 38,000 places, although afterwards the results will show that only 28,000 turned but that’s still pretty big.

Today, I have a proper race number ‘5287’ not ‘666’ and they’ve helpfully put everyone's name on their numbers as well, just in case you are so delirious at the finish that you forget who you are. Which is possible, as I’m in the first ‘Orange’ wave with Mr Gebrselassie.

Parking is great. We drive straight into the centre and park up in an NCP with no problems at all before heading off for a wander around. We’ve left the dogs at home but actually it wouldn’t have been too bad for them here, as it will be relatively easy for me to nip back to the car and fetch them once I’ve finished. They do love a bit of supporting. 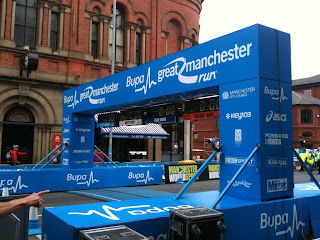 I head to the start to join the other 6,000 or so in my wave. Such numbers don’t leave much room for an aerobic warm-up and means there’s every chance you could gain a black eye if the runner next to you flails around too much to the warm-up music. It’s also quite difficult to get up near the front. I stand just behind the sub-40 pacer but we’re still miles back and I soon lose him in the crowd as he starts to push forward. I reckon we need waves within the waves here.

The marshals make a good fist of stemming the flow of runners across the start line with a sort of a funnel system, so initially it’s not too congested but things very quickly bunch up again. Not good, I fear Gebrselassie may be getting away from me already.

The sheer volume of runners makes it very difficult to maintain a steady pace and I’m 15 seconds or so behind where I want to be and nowhere near Haile. It’s not until half way that I manage to get a bit of space and record a few quicker splits. It’s a shame because it’s a course full of PB potential on pancake flat roads although the route itself is rather dull. When going past Old Trafford is the highlight, you know it’s not the best route in the world. It would have been nice to have seen more of the city centre.

The weather isn’t great either, it’s been drizzling on and off all morning, but it stays fine for my actual run, although if you’re a later starter you probably got soaked or if you opted to go through the ‘cooling’ shower that was erected at 6.5km. I gave it a very wide berth.

The atmosphere was patchy, probably the weather again. There was a good turn out but the spectators seemed subdued, certainly not as up for it as at Reading. Again the bands on the course were good, giving everyone a musical boost.

Then before I know it I’m sprinting (sort off) across the finish line on Deansgate. Then because L was in start number two, twenty minutes after me, I’ve got plenty of time to get back to the car to get some warmer clothes before heading back to the course in time to see her finish. 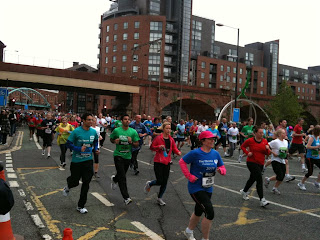 All in all, mass participation at its finest and achieving what these sort of races are all about, that is getting new folk into running.

The Great Salford Swim is also going on today, which we don’t get to see but we do wander up to have a look at the athletics track which will be in use later. 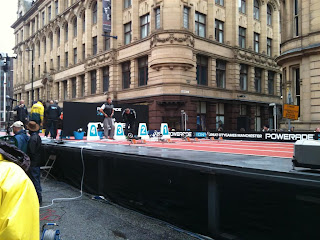 We would have stayed to watch but by now the weather is really foul so we opt to hit the motorways and head home.

Back home we do a few pubs, the White Hart In Lenton where we haven’t been for ages before revisiting the Johnson’s Arms Beer Fest. Then to round off things off, a well earned curry, for which Daughter joins us.