I’m on the bike again. Is this a good idea? With a serious-ish run to come on Sunday. Probably not and what’s worse it’s Friday the 13th. First running number ‘666’ and now Friday the 13th. Omens everywhere. I try to take it easy, luckily no one tries to overtake me.

I do manage to upset MD, whom I pass on his morning walk. The poor little dog seemed distraught that I’d gone off without him. Apparently he sobbed for ages, well, at least until they found a squirrel to take his mind off it. It usually does the trick.

Meanwhile I was distraught that Doggo didn’t react in the same way, in fact he didn't seem bothered in the least. He used to be bothered. I’m hurt that he no longer is.

The author of the post-its has been at it again. Those post-it notes are taking over. We now have Chaucer on the back of the bathroom door and something interesting to ponder whilst you’re busy in there. 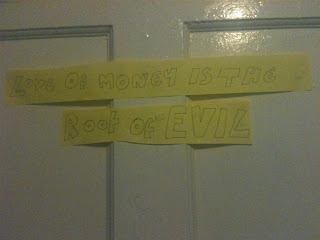 ‘Love of money is the root of all evil’, isn’t really top of my ‘must ponder’ list but if it gets her to Uni I’ll cope.

I didn’t realise it was Chaucer until told but yes, ‘Pardoner's Tale’, should have know that. Seen it on TV! And as a play. But I was pretty sure the quote was actually from the bible and Wikipedia, and Wikipedia is never wrong..., agrees. Plagiarism by Chaucer, tut tut, or perhaps he credits his sources, I haven’t looked.

We’re AF tonight. I have the aforementioned serious-ish run on Sunday and L has one tomorrow as well. However Sheffield Hallam have finally fixed their accommodation website, it’s been down for a month, so guess what I’m doing tonight. Going to be difficult without alcohol.