I cleaned all the assorted road debris, gunk and dog hairs out of my gears last night on bike number two, then give it a go this morning. Not promising and I didn’t fancy labouring into work with it and back, fifteen miles each way. So I abort and return home. I could have swapped bikes but instead I fetch the car and chuck the misbehaving bike in the back. I shall take it to A&E.

They tell me the rear wheel spindle has gone or something. They even showed me the play in it, blinding me with science at the same time. So it’s a new spindle or more probably a new rear wheel. I leave it with them.

Later whilst L's arguing with herself, trying to talk herself out of the gym again, she does a lot of talking to herself, I take the boys on the park. I’ve bought MD a new ball because we lost his old one over the fence into next door's garden. Which shouldn’t be a problem really, except nobody has dared venture into the darkest corners of their garden for years, probably decades. It’s very overgrown, with some fearsome triffid like plants lying in wait for anyone who ventures there. 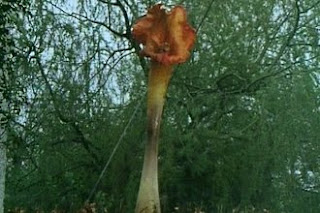 So unfortunately it’ll probably stay lost. It was a great indestructible dog ball as well, which I can’t find another one like.

His new ball is great too but for a different reason. I can kick it miles. He’ll sleep tonight.

L comes home from the gym. So not sure who won the argument.