Squash is cancelled tonight, my opponent is injured again, his back or something, I lose track.

Does that mean I cycle again... 3 days in a row? Or 4 even, if I do tomorrow as well. Or do I do some training e.g. running. Or taper even for Sunday.

I did get an email from the Great Manchester Run the other day saying ‘if you haven’t trained as much as you’d hoped, relax. What’s done is done’. Which is code for you’re stuffed. I get the bus, I’ll run later after work.

I get to work feeling knackered and I’ve not even ran yet.

L reports a pleasant amble with the angels this morning. Pleasant? Angels? Is MD not himself then?

I’ve buggered by training again. I forgot we were due at the pub for lunch, so now I’ve got to run on steak and ale pie and beer. I should have cycled. Too late now. It’s a very slow but funnily enough quite pleasant run. Just four miles or so.

At home the post-it notes have spread to the lounge, along with some sheets of A4. 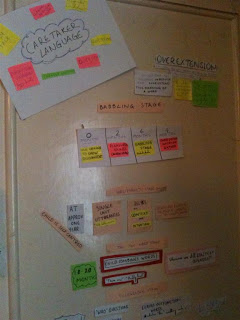 I’m feeling quite educated at the moment. Not that I’m sure what much of it means. I keep thinking of adding a few quotes of wisdom of my own but then think better of it.

Madame Post-it, Daughter, is out and L’s at the gym. So I offer to walk down and meet L for a swift half after her session, as we’re probably AF over the weekend with a lot of running going on. The Johnsons Arms has a Beer Fest going on... There’s only one downside, they’ve got Morris Dancers on. How much alcohol will it take to get through that? Probably more than a swift half.

When we get home later, I try to update this blog, as I’ve been getting miles behind. Cue excuses. I've been busy at home and they’re been asking me to do some work at the office as well. Cheek. Being in London didn’t help either. Now though I can blame it all on Blogger. The site has been down for the last couple of days and I’ve actually had material to post, honest, but couldn’t. So it’s not my fault, ok?

Of course you won’t be reading this until it’s fixed.