Apparently this weekend will bring high temperatures mixed with thunderstorms and it’s all the fault of the Spanish, and their ‘Spanish Plume’. They’ve sent their warm air over here where its immediately got into an argument with our resident Atlantic cold front and the result going to hot and thundery. So they say. It'll probably hail, during my race.

I start to explain all this ‘Plume’ business to L but she miss understands and starts texting Daughter to tell her to leave off the beef that’s in the refrigerator as it’s probably for my recipe. No... ‘Spanish Plume’ isn’t a recipe.

MD quite fancies it too, I think he’s got the running bug but he can’t join me today. Nor does L, she got bigger fish to fry and it comes a day too early to count in her ‘500 miles in her 50th year’ challenge. Her 49th birthday is tomorrow and she’s starting things off with a bang in the form of a half marathon.

The race start area and events village are in the same place as for the Clumber Duathlon, although the parking was further away but more importantly free of National Trust parking charges. 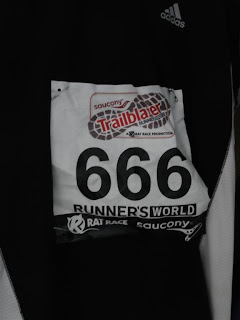 Hmmm, somebody’s having a laugh. It must be an Omen...

Everything is well organised. There’s free post-race massage, wine sampling and they even advertised ‘local’ ales in the beer tent. Unfortunately they fell down on that one. Their ‘local’ beers are Old Trip and Old Speckled Hen which are both brewed in Suffolk and by the brewery that closed down our local one.

I didn’t expect the organisers to get many people in the first ‘red’ wave (for predicted times of less than 40 minutes) involved in the aerobic warm-up ‘preparing their minds and muscles’ and they don’t. I think there were three of them and I think one of them might have been a ringer from the organising team.

There are eight waves in total and I’m in the second one, ‘blue’, which is for those who think they’re good but hadn’t got the bottle to put themselves in to ‘red’. I think there were half a dozen in our aerobic session; I’m not one of them. Don’t want to pull anything before I start.

The race briefing tells us all about the course and then the chap sends us off to ‘blaze those trails’. Who’s he talking to?

The course is well marked, apart from one spot where a marshal seems to have gone AWOL and we nearly follow the ‘spectator route’. There are also kilometre distance markers and two water stations. The trails are narrow, which means the staggered starts were probably a good idea, and sprinkled with bumps, roots and the odd dip. It’s quite undulating which soon saps the energy. For someone who hates off road, I seem to be doing quite a lot of them at the moment.

At first I let a few idiots career off ahead and wait for them to fade, which they do, whilst I stick to a sensible consistent pace. 4:25-ish. Consistently slow but imminently sensible. Then, suddenly, horror of horrors, I’m the idiot careering off in front. Well into second place. My legs tell me it isn’t going to last and it doesn’t. I eventually come in eighth in my wave.

The goody bag was ok with gels, energy bars, drinks and only the one sachet of body lotion, which makes a nice change. Unfortunately the three free magazines (Runners World, Triathletes World and Men’s Health) although a nice touch, are no use to me. One I already subscribe to, one I’ve retired from and the third wants you to swim in the Trent.

In the results, when all the waves are added together, I ended up 35th overall out of 669. Not bad. That’s also quite a good turnout for a first running of a race. Then it starts to rain, the ‘Plume’ has arrived, so we head home.

It’s the final match of the Championship season and Derby bow out with a defeat. Four in a row, good eh? It was heavy going though; they had to work hard for that defeat. They had to give away two penalties and a soft goal before they finally managed it by two goals to one.

Meanwhile Robbie Savage bowed out in ‘style’, in his underwear, as he threw all his kit and his boots into the crowd. Not a pretty sight. Fair play to the Reading crowd who had to put with that and still gave Mr Savage a standing ovation. I imagine that’s the first time in his 631 appearances that he’s got that from the opposition supporters.

A busy day ends with a trip to Birmingham. Its 6pm doors tonight at Academy 2 but there’s no support band. WTF. So it’s a bit of a drag waiting for the main band to come on, to say the least. There are only so many pints of Tuborg you can stomach while you wait e.g. one. Merchandising doesn’t keep us occupied for long. Sadly there’s no tour t-shirt, a special would have been nice because tonight it’s the 30th Anniversary Tour for The Icicle Works.

We were kind of here for the 25th, although the ‘here’ we had to go to was only as far as Nottingham’s Rescue Rooms on that occasion. That was the first time Ian McNabb had toured under the Icicle Works name for 15 years, then after a string of dates in 2006 and 2007 he retired it again. The purists (like me) were a bit miffed that original members Chris Layhe and Chris Sharrock weren’t involved but we had to lump it. Sharrock, to be fair, has been a bit busy and is currently spending his time with one of the Gallaghers in Beady Eye.

The line-up that takes the stage tonight, the last of just four dates celebrating their anniversary, is the same as that 2006 version: - bassist Roy Corkill, keyboard player Richard Naiff and the drumstick twirling ‘Dodgy’ drummer Matthew Priest.

They open with ‘When It All Comes Down’ a single only release from 1985, the extended version. If they're all as long as this, we might be here all night. McNabb confirms that possibility when he announces there’s no curfew tonight, so they can play as long as they like, and I see the colour drain out of my partners face. She prefers her gigs short and punchy, plus she’s got an early start for a half marathon tomorrow. Cheer up, this one’s your favourite, it’s ‘Evangeline’. 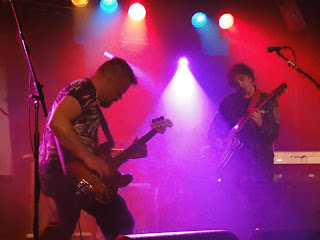 A nostalgic trawl through the band’s back catalogue follows: - ‘Little Girl Lost’, ‘Seven Horses’, ‘Rapids’ then what he describes as Scouse country rock ‘Who Do You Want For Your Love?’. Third LP side 1 track 5 he tells us, from a day when albums had sides.

McNabb’s voice still sounds great on all of these and he’s certainly giving it his all. He’s already dripping with sweat, yet he won't give up that army jacket. Which changes colour before our eyes, track by track, getting darker and darker as it gets wetter.

The title track from the fourth album ‘Blind’, the last the original trio recorded, follows with its ‘there's an actor in the White House’ lyric. He probably meant Reagan but he sings it as if it’s still relevant.

‘Melanie Still Hurts’ from ‘Permanent Damage’ recorded after the original line up broke up, is a run through his ex-girlfriends. Julie, Jackie, Carol - check. Sarah, Karen, Michelle - check. Though, he quips that, at only three minutes and forty seconds it only take us up to 1985. 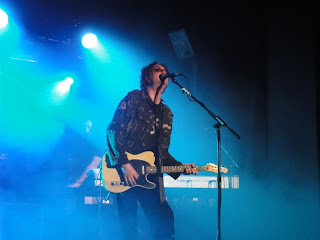 Then there's the heavier 'Shit Creek' which I just don't get and never did. ’Starry Blue Eyed Wonder’ is as good as ever and then, an hour in, if you’re old school you settle in for some indulgence, if you’re not you’re in some trouble. Seven of the next nine tracks come from their self titled debut album. The audience is split, half are ecstatic, the other half are looking at their watches. L is texting furiously and I don’t think it’s a review the Sunday Times is going to print.

We get a convoluted introduction to ‘Reaping The Rich Harvest’ in which McNabb confesses he has no idea what the song is about but assures us it sounds good. This causes confusion amongst the rest of the band, as this is not the next song on the set list. Yet, having given the song such a build up, they have to revise the order 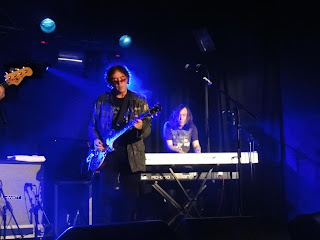 Richard Naiff's piano and keyboard playing was a delight all night, as was his recorder playing on ‘Lover's Day’. Then the dark and brooding ‘What She Did To My Mind’, pretty outstanding despite its four false endings and it’s followed by 'Up Here In The North Of England'. McNabb's view of north/south divide circa 1986. Tonight, he decides that Birmingham is more north than south.

Then after a trio of excellent cuts from that first album, the two hour set is finally ended with 'Birds Fly (Whisper To A Scream)' 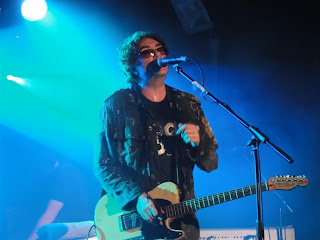 They come out for an encore with McNabb still in the same sodden jacket for a rocking 'Understanding Jane' but he must be feeling the heat because he’s removed his shades. Then they go off again. How quaint. No one splits their encores anymore. How eighties.

They’re soon back again, as is the jacket, for ‘Love Is A Wonderful Colour’ who some x-person off x-factor called Rhydian has just covered and the closing ‘Hollow Horse’.

To be honest it was probably 4 or 5 tracks too long but the ones I would have axed wouldn't have been the ones to go. It was so good to hear old album tracks like ‘As The Dragonfly Flies’ and ‘Factory In The Desert’.

I imagine now its back to Ian McNabb solo shows, at least until the 35th anniversary.